Home town – Gifu city  known of clear stream(river) Nagara river.
Start cycling and racing when Makito was in Junior high school(Not so serious. Makito preferred to go fun ride rather than racing).
Then he was moving to British Columbia in Canada as a student to learn English after graduated a high school in Japan.

In B.C., he was keen on cycling races with Gerick C.C.(Nelson) and Seymour  C.C.(Vancouver) in B.C. (1993 – 1994).  He enjoyed to participate races every week.  Especially, “Tuesday night Criterium Championships” in University of British Columbia was his favorite event because of the location.  While he was in B.C. he had an opportunity to stay short term at a family in Welland, Ontario where is near by city of Niagara Falls.  And he had an opportunity to ride with St.Catharines C.C. members and raced at 56 degree/120m loop track in Fonthill, Onatrio.  He realized that Ontario is the place for cycling rest of his student life..  Double lane riding on side of road, wine farm scenery, hills, generous Italian, Irish and Scotish back ground people there.

When he graduated from the school in Vancouver, he moved to Ontario again.  And entered Niagara College. he took Tourism course and graduated it in 1997. 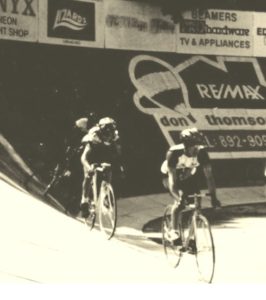 While Makito was in Ontario, he joined St.Catharines C.C. that club was known for former Steve Bauer and Gordon Singleton the regend of Canadian cycling heroes come from.
Makito enjoyed to race Track, Road as Cat.3 rider and sports level MTB category at that time.

BUT he was ignore about bike position at that time…  Therefore, He had experienced knee injuries several times(ITBand Syndrome), back pain and foot pain..  he did not know what he should have done at that time.

After long time past he backed to Japan, he has started to go Interbike what is the largest bicycle dealer show in North America since 2003.  One year of the show, he visited Specialized brand booth and saw some of Body Geometry concept products.  he thought I could solve the myths of my bike position…  That was a rough idea in his mind but nothing to act for it..  The year of 2009, he met Paul Swift(founder of BIKEFIT) at BIKEFIT booth of the show and one of staff introduced me a thin plastic plate called “Cleat Wedge”, an adapter for between shoes and cleat that only changes tilt of shoes.  After the show, he tried to assemble it to my shoes and go for a long ride.   He understood the product really improves(feel locking) knee alignment in pedaling.

That was his start point of interesting in bike fitting.  He is not  PT back ground but now he  has well knowledge of physio, anatomy and keep learning new things until now.  He believes the continuning education is very important.  All philosophies of bike fitting updated by time.

It is necessary to inform new things to bike shops / trainers in Japanese language.  He has started BIKEFIT.com education since 2010.  He also invites other bike fit agencies into Japan.  In fact, he had invited Retul into Japan in 2012 and he was being a certified Retul instructor.  Also the first GURU Academy course ran in 2018.